Update: It is with sadness that we report Winter the dolphin has succumbed to an gastrointestinal abnormality and died on 11/11/2021.

This is a heart-tugging story of chance, survival, recovery, inspiration and fame for a little Dolphin who would not give up.

While still a baby dolphin of only 2 or 3 months, a little bottlenose dolphin became tangled in a crab trap line near Cape Canaveral on Florida's east coast.  The line was so tightly wrapped around her tail that she could not escape.

Had it not been for a chance sighting by a fisherman, this would have been the end of the story for this poor little dolphin. However, with the help of the fisherman, Hubbs-Seaworld Research Institute and the Harbor Branch Oceanographic Institute, the baby was rescued and transported to the Clearwater Marine Aquarium on the west coast of Florida for help.

Clearwater Marine Aquarium has a long history of marine animal rescue and rehabilitation.  The Clearwater Marine Aquarium (CMA) team worked very hard against odds to save the little dolphin.  The damage done to her tail by the crab trap line was very severe.  The CMA team could not save her tail, but they were able to save her life.  Rescued in December, she was named "Winter" for the season in which she was saved.  This was in 2005.

Her body healed from the loss of the tail. She had to learn how to swim again with an awkward side-to-side style and learn how to eat fish (with no mother to show her).  So for this little dolphin without a tail, CMA adopted her into their aquarium home.

CMA feared that the unnatural side-to-side swimming movement Winter started using, instead of the normal up-and-down motion for dolphins, was damaging her spine and could eventually lead to her death.  After hearing about the situation, a company named Hanger Prosthetics and Orthotics, Inc. offered to help.  So with a team from Hanger, Dr. Mike Walsh - a leading marine mammal veterinarian, and CMA's experienced team, a plan was developed to create and fit a prosthetic tail for little Winter.

As the first artificial tail ever created for a dolphin, the team had to develop and learn new techniques and materials that would be compatible in a water environment and on the dolphin's sensitive skin.

After a challenging year and half of design and testing effort, the team successfully created and fitted a new tail. The prosthetic tail was like a form-fitting sleeve that was strapped on with flukes on the end for swimming. With help from the team, Winter had to learn to use muscles to move this artificial tail in the normal up and down motion.

The tail was a success, and in fact, one of the technologies developed by Hanger was a special silicone gel sleeve they named WintersGel™ which is now used to make prosthetic limbs more comfortable for humans as well!

The tail cannot be left on permanently as it would case too much wear on her skin. Instead it is attached for for short periods each day for physical therapy to keep her muscles and spine healthy.

Of course the story doesn't end here. Word got out of this amazing little dolphin and her will to survive. Soon she was an inspiration to many and later became the source for both a book and a movie to share this incredible journey of life.  Warner Brothers and Alcon Entertainment created and released "Dolphin Tale" on September 23, 2011. Winter was now a movie star!

For more information about Winter and the Clearwater Marine Aquarium, follow this link: Seewinter.com 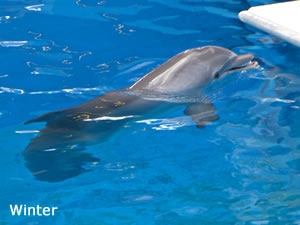 Winter at her Clearwater Marina Aquarium home
(swimming without her tail) 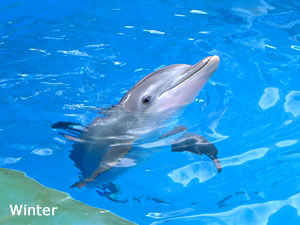 Winter posing for a picture! 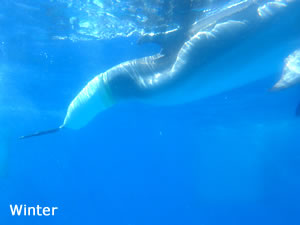 An underwater view of Winter swimming
with her prosthetic tail 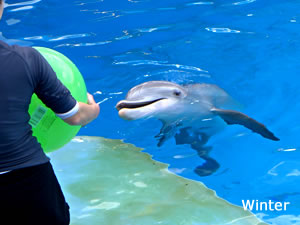