More than Just for Lovers

The northernmost barrier island in the Gulf of Mexico, it is an unspoiled testament to the way things used to be in sunny Florida.

First inhabited by the Tocobaga tribe in the 1500s, this small isle has been settled by a number of different groups of people from pirates to early European settlers to hog farmers. Historians say it first appeared on maps of Florida around 1830. At that time, it was known simply as Sand Island. Fifty years later it had a name change – Hog Island – prompted by the presence of a few less-than-profitable hog farms that made their home there. A hurricane in 1921 forever changed its geography. The storm caused it to split, forming Hurricane Pass and Caladesi to its south.

It wasn't until Florida's heyday in the 1930s and 40s, however, that this picturesque island began attracting the attention of Americans. In 1939, New York developer Clinton Washburn purchased the land, built some bungalows there, and began to tout it as the ideal honeymoon destination via magazine ads and newsreels that appeared in movie theaters. Washburn, in conjunction with Life magazine, held a contest for newlyweds and awarded the winner a two-week stay. That, historians say, is how it got its name.

A causeway from the mainland opened a route to more traffic in 1964 and Washburn sold the island. Through the decades, it has passed through the hands of numerous developers, all of whom have had different ideas about what this place should be.

Today, however, Honeymoon Island is more a destination for nature lovers than for honeymooners, though it's still a lovely, quiet destination that can be included as a day trip during a honeymoon to the Tampa Bay area.

Honeymoon Island State Park, which occupies most of the island, is one of more than 150 Florida state parks and is a 2,810-acre unblemished paradise far from the very crowded mainland and its tourist-favored beaches. Here, kids can play in tide pools, hunt for shells, and enjoy the warm waters of the Gulf of Mexico with few distractions. Families love it because their children are safe and content and couples and individuals enjoy its unspoiled beauty and the opportunity to – as the saying goes – commune with nature.

Four miles of shoreline include several places where visitors can swim and snorkel, with boardwalks leading out to the main beach area. There's a pet beach on the south end – one of just a few in Pinellas County that welcome four-legged friends. The best shelling beaches are located on the north end. The beaches also include lovely wooden swings where visitors can sit and enjoy the view, and showers and rest rooms for the convenience of swimmers and sunbathers. Surfing is also permitted.

A concession stand – dubbed the Honeymoon Café - sells food and beverages and guests can enjoy their selections while seated on a covered wooden deck with a view of the beach. The concession also sells beach gear, including suntan products, boogie boards and rafts, bathing suits, flip flops, hats, and other beach-related necessities visitors may have forgotten to bring with them. Guests can also rent kayaks, umbrellas, and beach chairs at the concession. 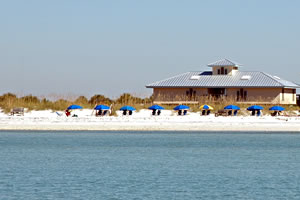 Visitors can also take advantage of surf and pass fishing (check for license regulations) and can expect to catch flounder, snook, trout, redfish, snapper, whiting, sheepshead, pompano, Spanish mackerel, cobia, ladyfish or tarpon, depending on the season of the year.

Wildlife viewing is tops here, and in 2007, the park opened a Nature Center. Open daily from 9 am to 5 pm, the center features a number of hands-on and interactive exhibits about the local flora and fauna and also offers an observation deck for a great view of the area. Visitors can follow up a visit to the nature center with a guided ranger tour of the state park or a self-guided tour along the park's trails, like the Osprey Trail, which winds for 2.5 miles through rare Florida virgin slash pine stands. Covered picnic pavilions and grills are located near the trail for those who want to stop for lunch. Groups may reserve the pavilions in advance.

Best of all, Honeymoon Island is a bargain. Prices are charged by the number of people in a vehicle or as a pedestrian / bicyclist. Once you've arrived, all the sunshine, clear water, and breathtaking views are free! 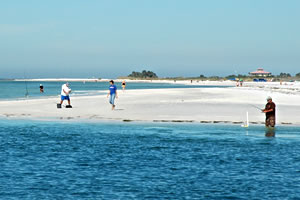