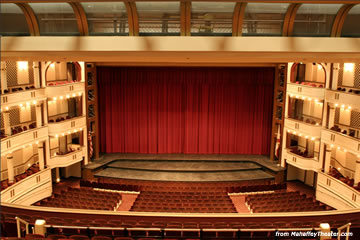 The Clearwater/St. Petersburg area has consistently gained a reputation as one of the most cultural areas on Florida's west coast, thanks to wonderful entertainment venues that offer first-rate performaning arts, from concerts to plays and musicals.

The Mahaffey in St. Petersburg is one such venue.  This European-style theater is truly one of the most elegant theaters in Florida and it continues to attract music aficionados from all over the greater Tampa area and beyond with its fine array of offerings.

The Mahaffey was originally opened in the 1950s as part of a complex known as the Bayfront Center.  During renovations in the late 1980s, the venue changed its name to honor a local family that had been particularly generous with funds for the refurbishment.

The theater once again underwent extensive renovations and much was added to the venue when the Bayfront Center Arena was torn down in 2004, allowing for a huge increase in size.  About $20 million was spent on this project, which added significant space to the lobby, ballrooms, and guest amenity areas.

Mahaffey Theater has an annual program that varies greatly throughout the year, offering an eclectic collection of music, dance, and more.

The theater is the home base for The Florida Orchestra.  This top-notch performing group was formed in 1968 as the Florida Gulf Coast Symphony when orchestras from St. Petersburg and Tampa decided to merge.  Since that time, the group has expanded and so has their repertoire, which now includes everything from traditional classical music to rock and pop arranged for orchestra.  Special guests often appear with the orchestra, which is recognized as the best in Florida.

In addition, interested audience members can purchase tickets for visiting dance troupes, including folk ensembles and ballet performances, such as the annual presentation of Tchaikovsky's The Nutcracker.

Ticket prices vary with each event and are available at the box office or through agencies such as Ticketmaster.

For a truly fun and elegant night out, Mahaffey has paired with area restaurants to offer a program known as Mahaffey Gourmet.  All the participating restaurants are just a few blocks from the theater and offer special same-day discounts to patrons when they show their theater stubs. The concierge desk in the theater lobby keeps menus on hand for each of the participating restaurants – more than a dozen in all - and can help assist patrons with reservations for lunch or dinner before or after the show.

Besides being a wonderful place to enjoy a concert, Mahaffey Theater is also a popular place to hold wedding receptions and other gala events.  The Grand Ballroom is simply breathtaking and having a wedding there is a dream come true for any bride and groom.  The ballroom seats about 200 guests, but there are smaller rooms available for more intimate gatherings or corporate parties and a lovely patio area is popular for outdoor get-togethers or pre-party cocktail hours.