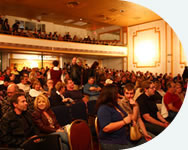 About The Historic Theatre

The Capitol Theatre opened on March 21, 1921.  It is reminiscent of a classic Hollywood theater with its structure, large mezzanine and furnishings.  The theater played movies and vaudeville performances.

Over the years it underwent various restorations and was renamed the Royalty Theater in 1981.   The theater was purchased by the city in 2009 and renamed back to the Capitol Theatre.  Ruth Eckerd Hall is contracted by the city to manage the theater and schedule performances.

In 2011, an effort began to renovate and restore the theater to its 1921 glory.  The project is part of Clearwater's successful efforts to revitalize the downtown area.